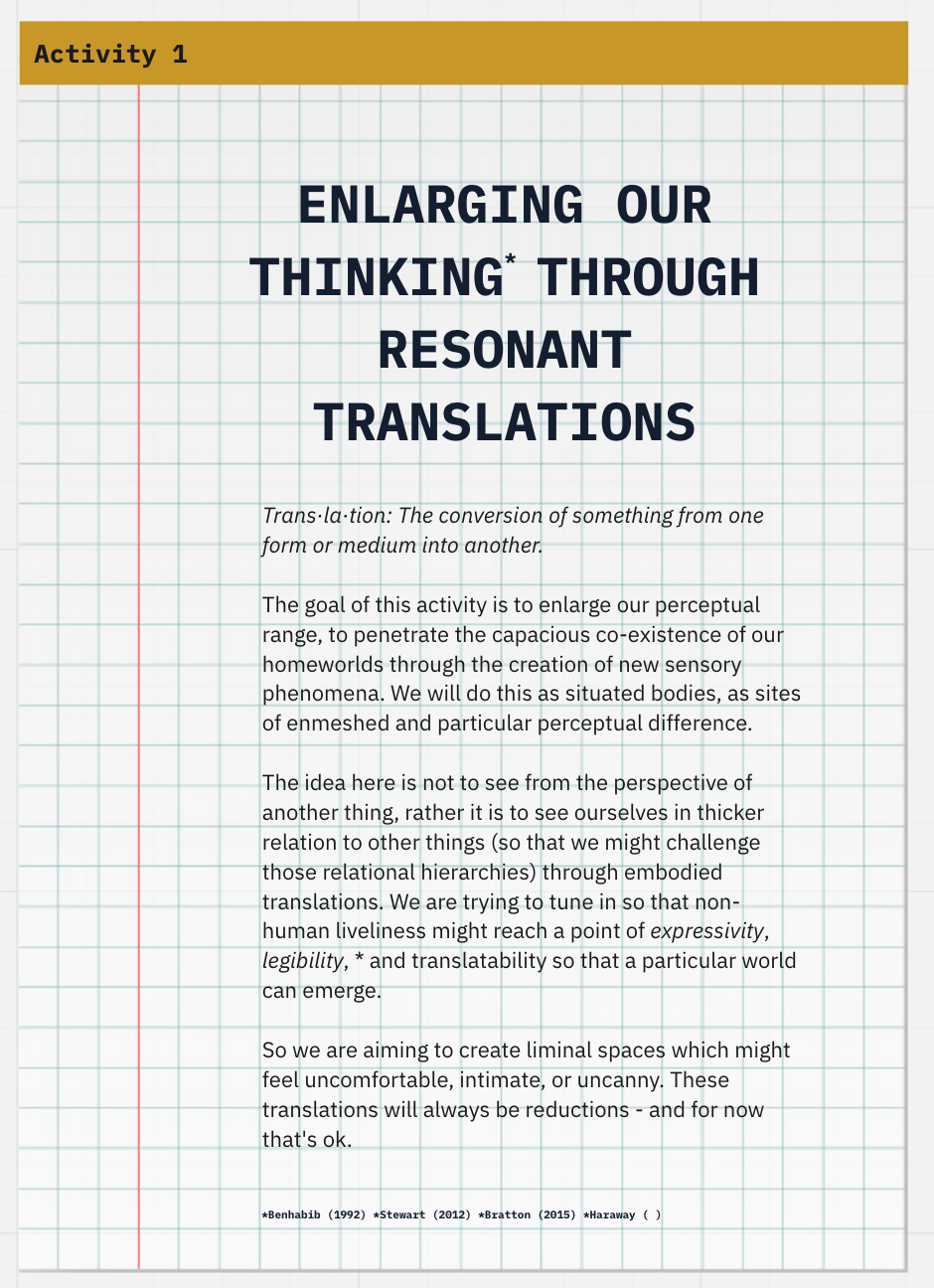 The goal of the workshop is to collectively unpack how feminist notions of care can help us productively frame and conduct research aimed at pluralversal and interdependant resiliencies. Care as a feminist practice is about attending to what, how, and when things get caring attention and come to matter and what, how, and when things don't. It entails a relational understanding and expression of subjects, labors, and temporalities. It is an embodied practice which is necessarily multi-nodal. So when we work to understand and express other alternatives for living in a world as well as possible we similarly need methods and capacities which are relational, and non-human centered. We require ways of attending to conditions of needs rather than immediate needs alone. Together we will use care as a lens for speculative worlding to explore how we might better negotiate a collaborative (or more-than-just-human) determinations of as well as possible.
It is not news that the effects of humans’ activities on critical earth systems such as the biosphere, atmosphere, and cryosphere are now markedly visible. Critical discourse on what had been termed the Anthropocene, Capitalocene, or Chthulucene work to further understand these exploitative and destructive activities as effects not just of our human actions but of our human-centered ways of thinking and knowing. They characterize the epistemological and ontological exceptionalism from which these activities originate. Modernity, as a world, “self-referentially perpetuate[s] a law-like structure of being complete, total, or ‘naturally’ thus.” Thank you, Patricia Reed, for so eloquently stating the ugly muck we find ourselves wading in. I believe, however, in our capacity for new imaginaries, which are not closed off, complete, and make room not just humans to survive and flourish.
Yet with these concerns we are required to care in new and scalar ways. Ways which stretch our capacity beyond self-efficacy towards a relational efficacy. Although care has been described as a “form of political imagination to fuel hope and desire for transformative action” (per Miriam Tiktin’s reading of Maria Puig de la Bellacasa) care is not an ideal, not an innocent, not a utopia. It is not safe, moral, or stable either. Care is a way to see the thickness of our present and to thicken our futures because it makes sense of being on earth as a necessarily interdependent and relational practice of attunement rather than domination.
Of course elaborating and articulating such futures is quite a dense knotty thing. I focus on ways to find the everyday spaces of interstitial being and knowing that work as foundational and material points of departure for more-than-human care. This in part explains why I situate this workshop and my work more broadly at home. As Arturo Escobar so poetically describes “the act of dwelling is the fundamental medium of being in the world.” So, my interest in exploring these new imaginaries grounds itself with homeworlds as companion landscapes and asks that we think co-speculatively.
To that end, this workshop will make a two part speculative move meant to enlarge our perceptual range, and to penetrate the capacious co-existence of our homeworlds. We will do this through the translation of new sensory phenomena and through alternative care translations. Critically we will also do this as situated human bodies, as sites of enmeshed and particular perceptual difference.
I focus on translations for several reasons. The first is that they own their reduction. As Nicolas Bourriard states, “translation always implies adapting the meaning of a proposition, enabling it to pass from one code to another... every translation is inevitably incomplete and leaves behind an irreducible remainder.” This is critical when attuning to the particular voices of more-than-human others and engaging them as the 'real but-as-yet-unnamed' in Benjamin Bratton’s speculative thinking or fact telling per Donna Haraway’s SF.
Anthropologist Anna Lowenhaupt Tsing also writes about translations. Saying [capitalism] "translates across living arrangements, turning worlds into assets. Alienation is that form of disentanglement that allows the making of capitalist assets...from all kinds of livelihoods, human and non-human." I love this quote so much because it provokes so potently the speculative question: what else might we translate between entangled worlds then? So when we move towards speculating on the imagined but-as-yet-not-real or storytelling we will experiment or play with translating other conditions by expanding or redirecting who and what gets attention from individuals or regimes of care. This framework is how we will scaffold our speculative worlding.
It is my hope that by using speculative fabulating to expose some of the milti-scalar co-existences as part of a totalizing mesh-world we might gain a foundation for thinking with our differences and our hyper locations as actively in relation to that totality. Because for me that is thinking with care.
Participants: Ann Light, Doenja Oogjes, Holly Robins, Tammy Shel, Audrey Desjardins, Anu Reddy, Gabrielle Benabdallah, Tyler Fox, Michael Beach, Neilly Herrera Tan, Velvet Spors, Armi Behzad, Shana Agid, Cally Gatehouse, Austin Toombs, Alex Taylor, and Ron Wakkary.
This project has received funding from the European Union’s Horizon 2020 research and innovation programme under the Marie Skłodowska-Curie grant agreement No 813508.
Publication
Check back soon; we have a zine and academic paper in the works for this porject.
↑Back to Top